3D
Scan The World
1,556 views 79 downloads
Community Prints Add your picture
Be the first to share a picture of this printed object
0 comments

This is a Courage part of The Gladstone Memorial, a dramatic group of a mother defending her child from danger. The child, naked and vulnerable, clutches in alarm at the body of the mother, who has seized the neck of the marauding snake in one clenched fist, the other powerful hand holding the short curved sword with which she is about to strike off its head. She wears on her head a Heraclean lion’s head and skin, symbol of strength (more examples of this at the bottom of this page), and though seated, like the other figures, the sense of dramatic movement is shown in the force of her arm, the twist of the drapery across her stomach, and the push of her knee to crush down on the body of the snake. A splendid creation.

The Gladstone Memorial is one of the more significant memorials in London. If we consider a hierarchy of monuments, with the average being a single figure of a personage on a tall pedestal, then to have four allegorical groups around the central statue is a fairly ennobled place. In London, after the Albert Memorial, unrivalled in Britain, the Victoria Memorial in front of Buckingham Palace, the mighty single figure of Achilles for Wellington (see the Hyde Park Corner page), and the two great pillars to Nelson (with his lions) in Trafalgar Square and the Duke of York in Waterloo Place, the next size down is the Gladstone memorial – indeed there are not so many others in London with several groups – the Wellington monument at Hyde Park Corner has four standing figures around the equestrian figure, and Queen Anne in front of St Pauls has four allegorical figures, and comparable in weight would be Boadicea at Westminster Bridge in her mighty chariot, but not much else. 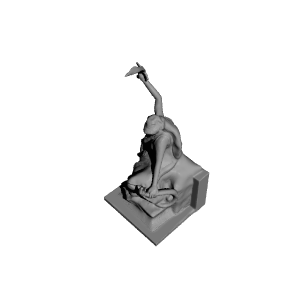