Shihan Stele, Stele representing a warrior from the land of Moab at The Louvre, Paris

3D
Scan The World
4,518 views 105 downloads
Community Prints Add your picture
Be the first to share a picture of this printed object
0 comments

Shihan Stele, Stele representing a warrior from the land of Moab at The Louvre, Paris

This basalt stele, sometimes called the Shihan stele, was the oldest monument from the Holy Land to be found in the Louvre's collection until the inter-war excavations bore their fruit. The figure represented on the stele, for a long time identified as a king or prince, might also be a warrior god. The dating of the work, however, still poses many questions, with the current estimate ranging from the Late Bronze (c. 1200 BC), to the Iron Age (c. 800 BC).

This basalt stele was discovered in 1851 by Félicien de Saulcy, in the course of his famous journey around the Dead Sea, so fruitful in important cartographic, archaeological, and entomological observations. Too heavy to be carried away, it was nonetheless immediately published, and the precision of the mapping allowed the Duc de Luynes, who undertook an expedition in 1864, to locate the stele and bring it to France to be presented to the Louvre. It was found at Redjom el A'abed, a site on the eastern shore of the Dead Sea, near Shihan, at the heart of the biblical Land of Moab. The site was not excavated and the archaeological context of the find remains unknown. It could, however, equally well have been brought there from some other unknown and even quite distant site.
The edges of the relief have been broken off, apparently to reduce the weight and facilitate transport. The squat figure holds a spear, point facing downward, with his right arm raised, and the left crossing the chest. He wears no more than a short loincloth, its upper edge rolled at the waist. The head, turned in profile over shoulders presented frontally, is clad in a close-fitting helmet leaving the ear uncovered. From the top of the stele falls a long tress rolled up at the end. At the bottom left is an animal shown in profile, possibly an eagle or a lion.

For a long time some have considered the figure to be a prince or king represented on a victory stele. Others have identified it as a warrior god related to the Baal of Canaan, god of the storm, whose spear would symbolize lightning, as in the famous stele of Baal with lightning from Ugarit, also in the Louvre, and the numerous Levantine Bronze-Age metal figurines, particularly of the 14th to 12th centuries BC.
Behind the god, whose loincloth resembles that of the Egyptians, is perhaps his animal attribute. The long tress rolled up at the end is comparable to Hittite examples found on certain cylinders of the 17th century BC and imitated in the Levant, as for example in the Baal stele from Ugarit. In these cases, the tress falls from the nape of the neck rather than from the top of the helmet as seems to be the case here. If this is indeed a representation of a god, it is not known under what name he may have been worshipped: he may perhaps be Kamosh, the national god of Moab, to whom was dedicated the stele of King Mesha (9th century BC), also to be seen at the Louvre.

The dating of this stele remains problematic. For some, the squat proportions and Egyptian influence on the figure (the loincloth, headdress or helmet) would establish a link with the Ammonite sculptures from Amman, dated to the 8th century BC. For others, the hair with its long sinuous tress and the spear that is carried - both recalling attributes borne by the Syrio-Canaanite gods of the latter half of the 2nd millennium - suggest a date in the Late Bronze Age, around 1200 BC. 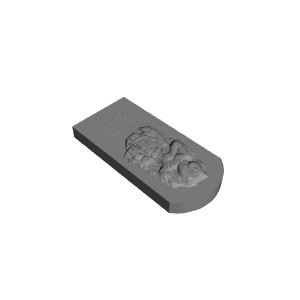 ×
0 collections where you can find Shihan Stele, Stele representing a warrior from the land of Moab at The Louvre, Paris by Scan The World