The God of Health shows the Bust of Louis XIV in the Louvre, Paris

3D
Scan The World
6,388 views 692 downloads
2 collections
Community Prints Add your picture
Be the first to share a picture of this printed object
0 comments

The God of Health shows the Bust of Louis XIV in the Louvre, Paris

The God of Health shows the Bust of Louis XIV to France, or Allegory alluding to the Recovery of the King is a relief by  Nicolas Coustou.

This admission piece for the Académie Royale de Peinture et de Sculpture by Nicolas Coustou is an allegory in praise of Louis XIV, who had recently recovered from illness. This work, whose subject and design was imposed by Le Brun while Coustou was busy working on the Grand Trianon, does not reflect the sculptor's talent. Coustou took over six years to finish the work, and was even struck off the list of registered artists before eventually submitting the piece in 1693.

An allegory in praise of Louis XIV

This allegorical bas-relief centers on a bust of King Louis XIV set on a pedestal. On the left, Pythian Apollo, the god of health, stands over the dragon he has slain. He covers the bust with his cloak, apparently shielding the king from the specters in the cloud, which represent illness. To the right of the king is a young reclining woman, wearing a crown and holding the fleur-de-lis scepter, who personifies France. She looks gratefully toward the young god. This is a direct allusion to the king's recovery from illness in 1687.

Nicolas Coustou applied to the Académie Royale de Peinture et de Sculpture when he returned from Rome in 1687, and was registered. For his admission into the Académie he had to execute a marble bas-relief, the subject and design of which were imposed by the painter Le Brun. The theme is related to a series of allegorical scenes in honor of Louis XIV, such as Sculpture Presenting the King's Medallion to Painting (1682, Louvre Museum) by Jacques Prou, or Poetry and Music Celebrating the Glory of King Louis XIV(1686, Louvre Museum) by Jean Rousselet. The king had recently been threatened by ill health, and Coustou was required to celebrate his recovery.
The artist was very busy with the construction of the Grand Trianon at Versailles and perhaps lacked enthusiasm for a composition over which he had no control. Despite several postponements, he was unable to produce his marble in time and was struck off the list of registered artists. He was re-registered in 1693 and admitted on August 29 of the same year.

This work - a formality to allow the sculptor to enter the Académie - does not reflect the sculptor's talent.
The appreciation of space is defective: Apollo is set in the foreground, standing before the bust of the king in the background (the drapery around the god's hips falls in front of the bust's pedestal; the thickness of the relief places him at the same level as France), yet Apollo's protective gesture toward the king with his cloak suggests that he is on the same level as the bust, even just behind it. The figure of the god is apparently a reference to the Apollo Belvedere(Vatican), an ancient statue that had embodied ideal beauty in art since the Renaissance. But in Coustou's Apollo, the position and proportions of the legs are incorrect. Moreover, the god seems to be weightless as he stands on the dragon. For an admission piece, and a work devoted to the glory of the sovereign, the lack of finish in the details is also surprising: the king's bust is not finely worked, and the depiction of the dragon is unconvincing.
Yet there are some fine elements. The figure of France is rendered with fluidity and elegance. The low relief of the clouds and the specter emerging from them successfully evoke the intangible nature of illness and its passing.

The bust of Louis XIV depicted in the relief is a working of Bernini's highly praised sculpture of him. 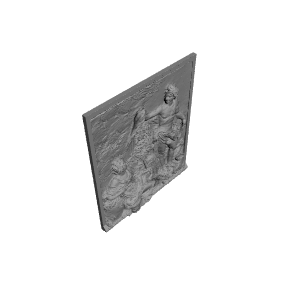 ×
2 collections where you can find The God of Health shows the Bust of Louis XIV in the Louvre, Paris by Scan The World