The God Pan at The British Museum, London

3D
Scan The World
3,998 views 158 downloads
Community Prints Add your picture
Be the first to share a picture of this printed object
0 comments

The God Pan at The British Museum, London

In Greek religion and mythology, Pan is the god of the wild, shepherds and flocks, nature of mountain wilds and rustic music, and companion of the nymphs. His name originates within the Ancient Greek language, from the word paein (πάειν), meaning "to pasture." He has the hindquarters, legs, and horns of a goat, in the same manner as a faun or satyr. With his homeland in rustic Arcadia, he is also recognized as the god of fields, groves, and wooded glens; because of this, Pan is connected to fertility and the season of spring. The ancient Greeks also considered Pan to be the god of theatrical criticism.

In Roman religion and myth, Pan's counterpart was Faunus, a nature god who was the father of Bona Dea, sometimes identified as Fauna; he was also closely associated with Sylvanus, due to their similar relationships with woodlands. In the 18th and 19th centuries, Pan became a significant figure in the Romantic movement of western Europe and also in the 20th-century Neopagan movement.

An area in the Golan Heights known as the Panion or Panium is associated with Pan. The city of Caesarea Philippi, the site of the Battle of Panium and the Banias natural spring, grotto or cave, and related shrines dedicated to Pan, may be found there.

It should be printed big enough otherwise it will be difficult to clean supports. Clean it gently and carefully and don't hold from head when you clean supports, hold from base. Enjoy your print. 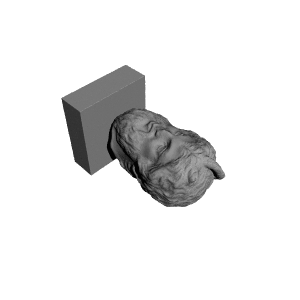 ×
0 collections where you can find The God Pan at The British Museum, London by Scan The World