3D
Scan The World
3,277 views 86 downloads
Community Prints Add your picture
Be the first to share a picture of this printed object
0 comments

Dedicated to the memory of Sir Thomas and Lady Grantham, 1618. Generations of the Grantham family had given service to both the Church and the City, and they had resided within the parish, in Brauncegate (which was later to be renamed Grantham Street, in honour of the family).

St Mary le Wigford church, Lincoln. Grade I listed. The site has had settlements since the Iron Age, and the Roman IX Legion arrived in 50AD, when the area became a busy military base. After the Romans departed, Vikings and Danish invaders settled, and the area was known as Wicford. The first church was a simple two cell building, and later the tower was added. The church was built by Eirtig on his own land, and a dedication stone was incorporated, using a re-used Roman gravestone.

The church dates from the 11th century, the west tower is from that date or earlier, and has a reset stone with Roman and Anglo-Saxon descriptions, as described above. The rest of the church is mainly Early English with a 13th century north aisle and two bay chapel; the nave has an arcade of three bays. The south aisle is modern (1877). There is a fine chandelier of 1720 given by the Mayor. There is a 19th-century barrel-vaulted roof, and the 20 foot tower arch has a 20th century glazed screen.

The church contains a tomb to Sir Thomas Grantham, died 1618, although the two recumbent effigies upon it are in poor condition. The font dates from the 15th century. The organ is by Forster and Andrews.  In 1848 the railway was built within yards of the church. The church was restored in 1872, and is the tower restored in 1908. Further additions and alterations were made in 1975. The east window is by Clayton and Bell, 1877.

For several years the church was used as a centre for the homeless and vulnerable. 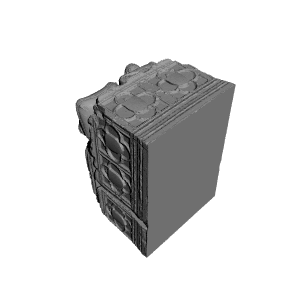 ×
0 collections where you can find The Grantham Tomb at St. Mary Le Wigford, Lincoln by Scan The World