3D
Scan The World
3,053 views 109 downloads
Community Prints Add your picture
Be the first to share a picture of this printed object
0 comments

Zadkine left this work in the garden of his studio in the Rue d’Assas for some time along with other wood sculptures, which explains why its upper part is much damaged. Carved into the surface of a log, the figures represented are arranged in curves and counter-curves all around its circumference, espousing its forms. This work with its still Slavic notes - the almond eyes stylisation is one of the distinctive elements - is characteristic of a taste for the primitive which, following Gauguin, modern artists constantly adopted and reinterpreted. In some of its aspects, it is also reminiscent of Roman art. The "pagan" theme of harvesting and dance has been much tackled by modern artists, Matisse amongst others. This work relates back to the "the ancient tradition of those wood and stone carvers who, having left the forest, gave free rein to their dreams of fantastical birds and large tree trunks" of which Zadkine spoke of in his memoirs. 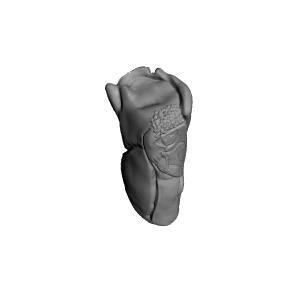 ×
0 collections where you can find The Grape Pickers at Musée Zadkine, Paris, France by Scan The World