The Harpy Celaeno at The Kelvingrove Museum, Glasgow

3D
Scan The World
4,783 views 256 downloads
2 collections
Community Prints Add your picture
Be the first to share a picture of this printed object
0 comments

The Harpy Celaeno at The Kelvingrove Museum, Glasgow

Celaeno was one of the Harpies first featured in Greek mythology, mentioned in Homer's Ilias (later extensively spoken about in Roman mythology in Virgil's Aeneid). Celaeno encoutered Aeneas at Strophades, known as the dwelling-place of the Harpies, where she gave him prophecies of his coming journeys.

Mary Pownall (1862-1937), a British female sculptor, sculpted this statue based on herself as the sitter. The bust was also displayed in the same year that she married in 1902. Despite little recognition nowadays, her studies saw her trave to Frankfurt, Paris (where she was tutored by Auguste Rodin) and Rome. 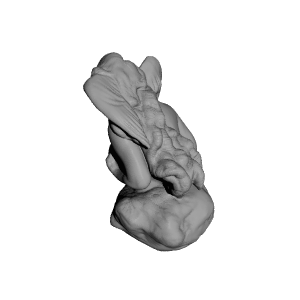 ×
2 collections where you can find The Harpy Celaeno at The Kelvingrove Museum, Glasgow by Scan The World