The Hound at the Middelheim Museum

3D
Scan The World
1,837 views 81 downloads
Community Prints Add your picture
Be the first to share a picture of this printed object
0 comments

The Hound at the Middelheim Museum

Toni Stadler was the son of the landscape painter Anton Stadler and student of August Gaul in Berlin. From 1906 he studied at the School of Applied Arts in Munich and from 1909 at the Academy of Fine Arts, Munich. His teachers were Hermann Hahn and from 1927 in Paris in Aristide Maillol. From 1914 to 1918 he was drafted into military service. Stadler was in 1925 with Hedda von Kaulbach, the daughter of the painter Friedrich August von Kaulbach, and after 40 years married to the artist Priska von Martin.  During his stay in Florence in 1938, he met Hans Purrmann to which an intense friendship was born. On July 16, 1939 - during the celebrations of the "Day of German Art" and the opening of the Great German Art Exhibition in Munich -. Was awarded to him by Adolf Hitler the title of a professor who was not connected to any office or income,  In 1942 he was awarded a full professorship at the Städel School in Frankfurt am Main. From 1946 to 1958 he was professor at the Academy of Fine Arts in Munich and in 1953 he was appointed there as Vice-President. Toni Stadler took part in documenta 1 (1955), Documenta II (1959) and documenta III in 1964 in Kassel. 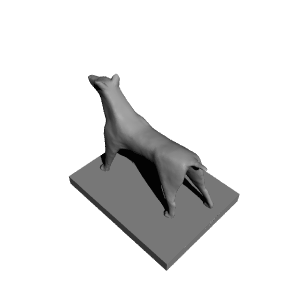