The Hulk is a fictional superhero appearing in American comic books published by Marvel Comics. Created by writer Stan Lee and artist Jack Kirby, the character first appeared in the debut issue of The Incredible Hulk(May 1962). In his comic book appearances, the character is both the Hulk, a green-skinned, hulking and muscular humanoid possessing a vast degree of physical strength, and his alter ego Bruce Banner, a physically weak, socially withdrawn, and emotionally reserved physicist, the two existing as personalities independent and resenting of the other.

Following his accidental exposure to gamma rays during the detonation of an experimental bomb, Banner is physically transformed into the Hulk when subjected to emotional stress, at or against his will, often leading to destructive rampages and conflicts that complicate Banner's civilian life. The Hulk's level of strength is normally conveyed as proportionate to his level of anger.

The model is printed on 0,1 layer height. Supports needed for the arms.

"update" The model on cover image is an sla print. 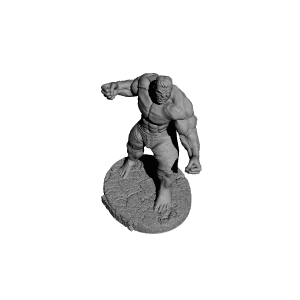 What paint did you use? Cura blew up with supports but it came out nice, great detail.

Fantastic model. Detail is great. Totally going to try and paint this!