Rodin frequently explored the further possibilities that arose from existing projects, revisiting the form, scale, material and, most significantly, the intention of his ideas. 'The Muse' began as small-scale figure on the tympanum (rectangular panel) immediately above the bronze 'Gates of Hell' doors for the new Museum of Decorative Arts, Paris, which Rodin was asked to design in 1880.

Rodin later developed the figure as 'The Inner Voice', one of two muses intended for the monument in Paris to the writer Victor Hugo, commissioned in 1886. His composition showed a naked Hugo flanked by two naked muses. The commissioners rejected this proposal as unsuitable for its proposed location in the Panthéon, though they allowed him to continue with the project.

After many revisions, Rodin ended up producing this figure. He cut off the arms and removed drapery that covered the knee, which signalled Rodin's increasingly conceptual approach to sculpture. The poet Rainer Maria Rilke, who worked as Rodin's secretary for a time, wrote of it, …'again and again in his figures Rodin returned to this bending inward, to this intense listening to one's own depth… Never was human body assembled to such an extent about its inner self, so bent by its own soul'. Rodin himself said of it: 'My figure represents 'Meditation'. That is why it has neither arms to act nor legs to walk. Haven't you noticed that reflection, when persisted in, suggests so many plausible arguments for opposite directions that it ends in inertia?' 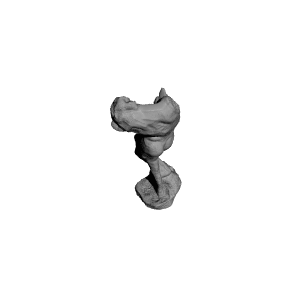 ×
1 collections where you can find The Inner Voice by vam
×
Rufus Martin
@RufusMartin
0
Printed on: Creality CR-10
Material: PLA
Posted at: 21st September 2021

this is a 400 mm print of the inner voice