The Inner Voice or Meditation

3D
Scan The World
1,794 views 103 downloads
Community Prints Add your picture
Be the first to share a picture of this printed object
0 comments

The Inner Voice or Meditation

Rodin reused the figure of Meditation, a damned woman on The Gates of Hell, for his Monument to Victor Hugo. In 1895 he cut the figure from the monument, tripled its size and renamed it Inner Voice. Rodin embraced traces of his working process and kept the mould seamlines. In other versions he even retained the severed knee that was damaged when the figure was cut from the Monument. He exhibited the work in this seemingly unfinished state in 1896 at the Salon, saying: "The study of Nature is complete, and I have made every effort to render art as complete as possible. I consider that this plaster is one of my best finished works, the most advanced".

This was scanned at The 'Rodin and the art of ancient Greece' exhibition at The British Museum, London (26th April - 29th July 2018). The work originates from the Musée Rodin, Paris, where it is on permanent display. 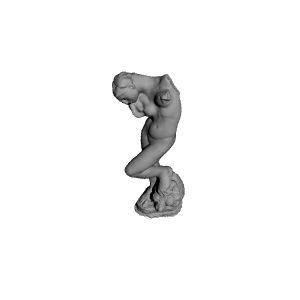