The Knitter in Ghent, Belgium

3D
Scan The World
2,121 views 83 downloads
Community Prints Add your picture
Be the first to share a picture of this printed object
0 comments

The Knitter in Ghent, Belgium

At the corner of the Zilverhof and Plume Lane is a window occupied by a sculpture: a background of a two-meter high block of bluestone is a bronze statue of a Knitter firm vastgeankerd. Opposite her is a collection of objects: a piece of a Roman column capitals, a car wheel and a preservative look. High above all this is a small barred window. The significance of this work is entered by the artist. The whole is the symbol of life and would thus "life" can be called. The three objects, Roman column, wheel, conserve tin, are emblems of dead or dying civilizations. Opposite is a young woman exercising an everyday activity, viz. Knit. She lives quietly and put everyday life on. Above all, it looks latticed window, symbol of introspection, of man's inner life. Even without one can enjoy the interpretation of that lovely impressionistic portrayed Knitter, a one-meter high bronze statue which many details are displayed. This work was published by the artist and some buddies in September 1976. The award of this 600-kg hard stone block with bronze statue and bench was accompanied by all sorts of difficulties. Advance the blind window had to be carved out and propped. Pulleys had to be confirmed. This is the first major work by Jean-Pierre CLEMENCON, a Frenchman who was living with his wife and daughter in the house. Born in 1946 in Salbris, a small village in the Loire region, he attended the Ecole Technique de la Salle Bourges was electrician, went to Paris where he became entangled in artistic circles and in 1971 came to Ghent in order to work in the steel industry. After three years, he gave it up to devote himself entirely to sculpture. After impressionist, whose "The Knitter" is the most typical, he finally switched over to expressive forms (only lying vrouwentorsen), and then make more abstract work after a period of symbolism. (Source: Ghent Peculiarities Karel Haerens - busy rich Het Volk NV 1980 - Gent) 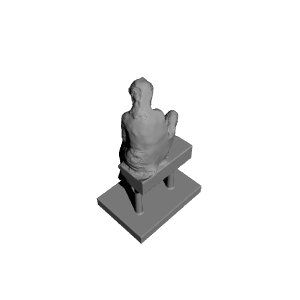 ×
0 collections where you can find The Knitter in Ghent, Belgium by Scan The World