The Large Spark at the Middelheim Museum in Antwerp, Belgium

3D
Scan The World
1,706 views 85 downloads
Community Prints Add your picture
Be the first to share a picture of this printed object
0 comments

The Large Spark at the Middelheim Museum in Antwerp, Belgium

Alicia Penalba (August 7, 1913 – November 4, 1982) was an Argentine sculptor, tapestry designer, and weaver. Penalba was born in San Pedro, Buenos Aires Province in 1913. She originally sought a career in drawing and painting. However, in 1950, during her stay in Paris she decided to commit entirely to sculpture. Penalba specialized in vertical organic forms and drew inspiration from fellow sculptors Etienne Martin and Etienne Hajdu. Her works are part of the non-figurative abstract art movement and tie in with the work of Martin, Hajdu, François Stahly, Karl-Jean Longuet, Simone Boisecq and Marta Colvin who staged a renewal of the sculptural form from 1950. By the 1960s, her artwork shifted slightly toward sculptures of a more horizontal orientation. While she created many sculptures of all shapes and sizes, she is best known for her monumental pieces that can be found all over the world. Her statue, The Great Double (Le Grand Double; 1962–1964) is included in the sculpture garden of the Kröller-Müller Museum in Otterlo, Netherlands, while the her 1972 version is displayed outside the MGIC building in Milwaukee, Wisconsin, US. She died in Paris in 1982. 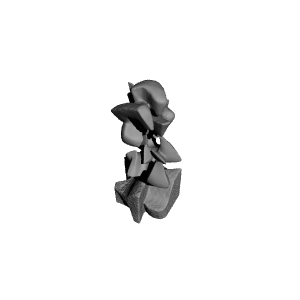 ×
0 collections where you can find The Large Spark at the Middelheim Museum in Antwerp, Belgium by Scan The World