3D
360°
Scan The World
2,707 views 261 downloads
3 collections
Community Prints Add your picture
Be the first to share a picture of this printed object
0 comments

The Laurentian Sow is an animal that features in the story of Aeneas, a Trojan hero (and son of Venus) in Greek Mythology mentioned in Homer's Iliad. In Roman mythology he is extensively written about in Virgil's Aeneid, where he is cast as an ancestor of Romulus and Remus.

He has been the subject of many artworks, notably his part in carrying his father from the flames of the fallen city of Troy (see Pierre LePautre's Aeneas and Anchises).

After emerging from the underworld, Aeneas was told that he would find his city indicated by a large white sow with a litter of thirty piglets beneath an oak tree, as seen in this work. This sculpture is parallel to the statue which stands in the Vatican in Rome, which is of the same name. 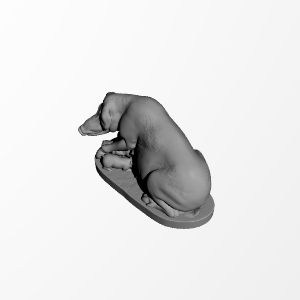