The Lion of England

3D
Scan The World
1,476 views 173 downloads
2 collections
Community Prints Add your picture
Be the first to share a picture of this printed object
0 comments

The Lion of England

This sculpture depicts The Lion of England, one of the Queen's Beasts.

The Lion of England is the crowned golden lion of England, which has been one of the supporters of the Royal Arms since the reign of Edward IV (1461–1483). It supports a shield showing the Arms of the United Kingdom as they have been since Queen Victoria's accession in 1837. In the first and last quarters of the shield are the lions of England, taken from the arms of Richard I "The Lionheart" (1157–1199). The lion and tressure (armorial border) of Scotland appear in the second, and the harp of Ireland is in the third. 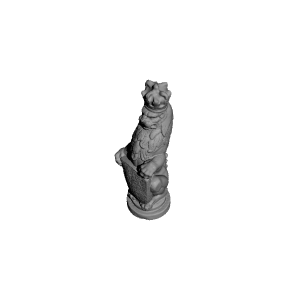