3D
Scan The World
13,264 views 3,174 downloads
8 collections
Community Prints Add your picture
Be the first to share a picture of this printed object
0 comments

The lion is the emblematic animal of the city of Lyon in France, mainly due to the homonymy between both names. In fact, the lion appears on the city’s coat of arms. This bronze statue was originally made for the “Biennal of Lions” an art festival organized between Lyon and another city during which artists from all over the world get to interpret in their own manner the lion of Lyon or the animal emblematic of the other city – during the past years there have been bears (Quebec) but also bulls (Torino).

The model of this statue is the most used one during the Biennal, although it is up to the numerous artists to make it their own. This lion was realized in a very restrained manner, with no other specificity but its bronze matter. However, this simplicity enables the public to focus on the majesty and the grace of the animal, emphasized by its position evoking forward movement. Man’s fascination for lions is visible through its many representations in all art forms ever since prehistory. It mostly embodies positive values such as courage, nobleness and strength. 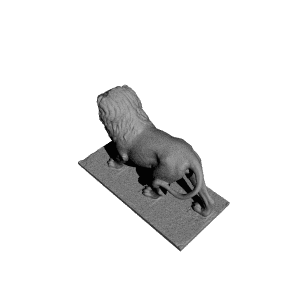