3D
360°
Featured Scan The World
5,782 views 925 downloads
14 collections
Community Prints Add your picture
Be the first to share a picture of this printed object
0 comments

The Apollo Lyceus type, also known as the Lycean Apollo, originating from Praxiteles and known from many full-size statue and figurine copies as well as from 1st Century BC Athenian coinage, is a statue type of Apollo showing the god resting on a support (a tree trunk or tripod), his right forearm touching the top of his head and his hair fixed in braids on the top of a head in a haircut typical of childhood.

It is called Lycean after its identification with a lost work described, though not attributed to a sculptor, by Lucian as being on show in the Lyceum, one of the gymnasia of Athens. According to Lucian, the god leaning on a support with his bow in his left hand and his right resting on his head is shown "as if resting after long effort."

This version of the Lycian Apollo is a Roman copy of the second quarter of the 2nd Century AD, after the Greek original attributed to Praxiteles. The work was discovered in Smyrna. The SMK's copy was acquired in 1901, directly made from the Louvre's version. The characteristic position with one arm resting over the head has, over time, been made identical to "resting" in many works of art, whether they represent men or women. Apollo is, as itself, a transgender figure. Today he is described as the "God of hermaphrodites and transvestites". 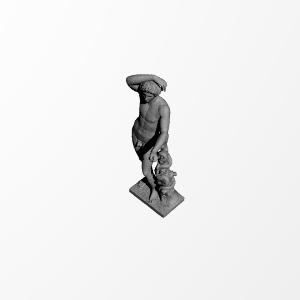