***Exclusive free file included with the purchase of an Elegoo Mars printer on MyMiniFactory.***

"Brogan was once the chief of the Bar’atuin clan. Half of his clan was wiped out by an almighty Behemoth. He faced the fearsome beast and wounded it, but it turned and fled. He left his clan in the hands of his brother, vowing not to return unless he did so wearing the hide of the beast. His pursuit of the Behemoth led him to some ancient Dwarf ruins where he encountered a party of adventurers who had been hired by an Elven Wizard to bring her the horn of a mighty behemoth. They had witnessed the Behemoth leaving Bar’atuin via a skrying spell that the Wizard had cast for them. They tracked it with an airship to the ruins. Brogan joined with them in their common goal and as they delved deeper and deeper into the ruins they could hear the ever louder roars of the beast. In the ensuing encounter, the Behemoth crashed though the supporting columns in one of the chambers, bringing the ceiling down on the party. When he came to, Brogan’s companions were all dead, crushed in the cave in. In checking them al for signs of life, he found the job sheet that the Elven Wizard had given them. He made his way back in the air ship to the Capital to meet with the wizard so that he can resume where the fallen adventurers left off." 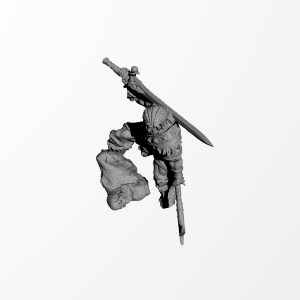 First Mini print! supported with auto supports in ChiTuBox + a few extra for missed overhangs, then based, primed and painted using my regular warhammer supplies.