The Man from Atlantis in Brussels, Belgium

3D
Scan The World
2,104 views 63 downloads
Community Prints Add your picture
Be the first to share a picture of this printed object
0 comments

The Man from Atlantis in Brussels, Belgium

Luk Van Soom comes from Weelde-Statie, a village in the north of the province of Antwerp, where he came in contact with a local furniture maker who inspired him to sculpture. He studied between 1973 and 1980 at the Academy of Fine Arts of Turnhout and the Royal Academy of Fine Arts in Antwerp and then at the National Higher Institute of Fine Arts in Antwerp until 1983. During that time he won awards such as the price of Lerius: figure model and the prize for sculpture at the Antwerp province. In 1992 Luk Van Soom represents Belgium at the World Exhibition in Seville, Spain. From 1990 to 1993 he was professor at the Rietveld Academy in Amsterdam. He is from 1990 to the present associated professor at the Academie St. Joost in Breda and worked from 1997 to 2003 as a professor at the Academy of Fine Arts in Antwerp. Since 1998 he is an independent artist. Meanwhile, he has about 50 images in the public space are through Belgium and the Netherlands.

Van Soom is fascinated by the elements: fire, water and air; by planets and clouds. One of his specialties is sculpting images in clay. Formless lumps of clay, a material nature, by Van Soom transformed into life-size figures. He also works with other materials such as steel, aluminum and plastics. Gravity and weightlessness are themes that recur constantly in his work. The imagery used by Soom, also refers to the Baroque period in which the tension between the material and the weightlessness is a constant. The search for that weightlessness and the ephemeral are characteristic of his work. The baroque language of Bernini and the great sculptors of the period he has an affinity. Spirals, extravagant shapes, winding lines and playful ornamentation emphasize that fantasy. Some of his works are related to the Christian symbolism. Stories from the Old and New Testaments are commonly used. It excites him the metaphysical. He keeps on the one hand fixed to the material, but would at the same time there also come off. His work is at once light and accessible, but it raises questions about the big questions of life: what are we doing here? How big or small is Man? Van Soom fits in with the Belgian surrealist tradition, characterized by alienation, agility and absurdist touches, where also René Magritte belongs. 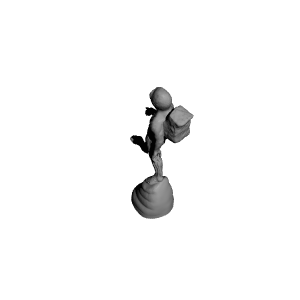 ×
0 collections where you can find The Man from Atlantis in Brussels, Belgium by Scan The World