3D
Scan The World
2,263 views 137 downloads
Community Prints Add your picture
Be the first to share a picture of this printed object
0 comments

This is an oak carving depicting the marriage of the Virgin Mary and Saint Joseph. The marriage is not mentioned in the canonical Gospels but is covered in several apocryphal sources, and later redactions, notably the 14th-century compilation the Golden Legend. Unlike many other scenes in Life of the Virgin cycles (like the Nativity of Mary and Presentation of Mary), it is not a feast in the church calendar.

In the Eastern Orthodox tradition, essentially the same scene, with very similar iconography, is considered to represent the earlier scene of the "Entrusting of Mary to Joseph", with Joseph being made Mary's guardian by the temple authorities.

In art, the subject could be covered in several different scenes, and the betrothal of Mary, with Joseph's blossoming rod, was often shown, despite its apocryphal origin. Wedding processions are also shown, especially in the Early Medieval period. 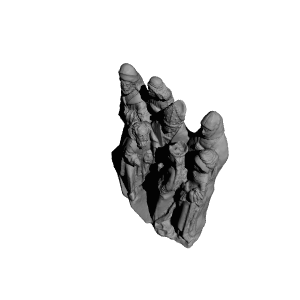