This figure, which appeared on the lower left-hand door and on the tympanum of The Gates of Hell, partially draped, with eyes veiled, and representing Fortune, was removed from this infernal context to begin an independent existence. It was then enlarged but still cut in the same way down the spine and on the back of the head as when it was attached to the bottom of the door.

Reclining, in an ambiguous attitude of either suffering or ecstasy, with arms apart and head falling backwards, the figure is portrayed in the manner convention had demanded since Antiquity for those who died a violent death. Rodin very probably drew his inspiration here from Stefano Maderno’s celebrated statue of Saint Cecilia (Santa Cecilia in Trastevere, Rome, 1600), but this work may also be compared to Bernini’s Ludovica Albertoni.

The figure is neither identified nor personalized. No detail recalls the history or death of the person portrayed. The naked body exposed to the public gaze bears no wound. The attitude of complete abandon and the facial expression with closed eyes establish parallels with Bernini’s Ecstasy of Saint Teresa. Could Rodin’s Martyr be the image of a woman in ecstasy, whose wounded heart is dying of love? 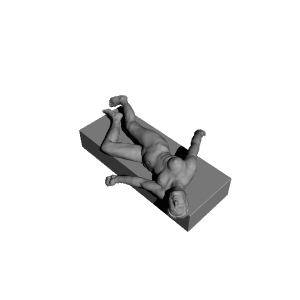