3D
Scan The World
2,105 views 78 downloads
Community Prints Add your picture
Be the first to share a picture of this printed object
0 comments

On 21 September 1895, Minne moved to Brussels and on 25 December, Minne's wife gave birth to the twins Marie and Agnes. Minne enrolled himself in the Academy for Fine Arts, which provided him a model. In 1896, the artist received a state allowance. Despite his precarious financial situation-moreover, he had to move various times and ultimately settled in a small villa in Vorst-and an attack of typhus, which nearly cost him his life, the Brussels' years were an exceptionally creative period for Minne. The Prodigal Son (1896), Man Grieving over a Dead Deer (1896), Man with a Waterskin (1897), Small Injured Figure (1898), and subsequent versions of kneeling youths, with as the epitome, his absolute masterpiece, Fountain with Kneeling Youths (1898), all came about from this period.

In Brussels he met Henry Van de Velde (1863-1957) and he arranged to go meet him in his Villa Bloemenwerf in Ukkel. There he met the sculptor Constantin Meunier (1831-1905) and the art critic and art nouveau expert Julius Meier-Graefe (1867-1935), who would play an important role in Minne's reputation abroad.
For the Partie Ouvrier Belge, Minne designed a monument in 1898 for Jean Volders, the socialist foreman who died in 1896. This is Minne's first project for a public space; however, his model was not accepted. 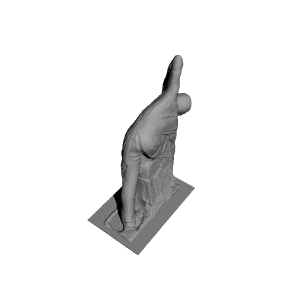