The Mausoleum at Halicarnassus / The Amazon Frieze 2

3D
Scan The World
2,195 views 128 downloads
1 collection
Community Prints Add your picture
Be the first to share a picture of this printed object
0 comments

The Mausoleum at Halicarnassus / The Amazon Frieze 2

Marble slab of the Amazon frieze of the Mausoleum of Halikarnassos. It represents combats between Greeks and Amazons.
This slab shows five figures, two Greeks and three Amazons, a horse and a figure carved across the join between two slabs (1019 and missing). On the left a mounted Amazon charges over a crouching Greek. The Amazon rides towards the left. Her right arm is raised, probably about to strike with a spear. Beneath the horse is a Greek. He is on his left knee. He may have held his sword in his right hand, since his scabbard is empty. The Amazon wears a Phrygian cap with neck-guard, chiton, long trousers and a chlamys. The Greek wears an Attic helmet with neck-guard, exomis, leaving his right side of the chest bare, chlamys, sword belt and scabbard.
To the right an Amazon and a Greek are fighting over a falling Amazon. The striding Amazon advances to the right and extends her shield towards her opponent. Below her is an Amazon on the ground, falling to the left. Stepping over her is a Greek, seen from the back. He may have overcome the falling Amazon and now faces another Amazon. The striding Amazon wears a high pointed cap or helmet with neck-flap, chiton belted at the waist exposing the right thigh, and chlamys. The falling Amazon wears a chiton belted at the waist leaving her right breast bare and boots and held a shield. The Greek wears a Corinthian helmet with crest and a chiton or exomis, leaving his right shoulder bare.
Near the right edge of the slab are part of a cloak and a booted foot belonging to a person who was mainly shown on the next slab (slab missing).
Metal reins were inserted in drill-holes; the weapons were attached in metal, carved or may have been painted. 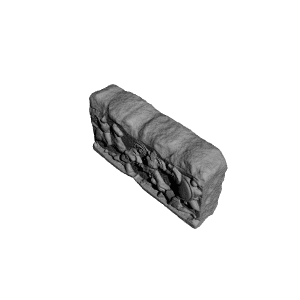