The Mausoleum at Halicarnassus / The Amazon Frieze 4

3D
Scan The World
2,508 views 139 downloads
Community Prints Add your picture
Be the first to share a picture of this printed object
0 comments

The Mausoleum at Halicarnassus / The Amazon Frieze 4

Marble slab of the Amazon frieze of the Mausoleum of Halikarnassos. It represents combats between Greeks and Amazons.
This slab shows four figures, three Greeks and an Amazon, and a horse and a figure carved across the join between two slabs (missing and 1020, 1020 and 1021). On the left a Greek youth hurls a spear at a retreating mounted Amazon. The Greek with busy hair, seen from the back, nude apart from a chlamys wrapped around his left arm, throws a spear to the left at a mounted Amazon. Only the tail and hind legs of her horse remain, the rest was carved on an adjacent slab, slab missing.
To the right an Amazon and Greek engage in combat over a crouching Greek. The Amazon, facing right, may have held a weapon in her right hand, with which she was about to strike. A Greek is down on his right knee and covers himself with his shield. He is defended by a Greek, who strides to the left, holding out his shield to protect his companion. His right arm is raised to strike at the Amazon with his sword. The hilt of the sword is decorated with a horse’s head. The Amazon wears a chiton with a chlamys over one shoulder belted at the waist and high boots with flaps. Her hair is drawn up into a knot on top of her head. The fallen Greek is nude apart from a Corinthian helmet without crest. His companion wears an Attic helmet with for-and-aft crest and long horsehair plume.
At the far right an Amazon, on the slab join, aims a spear to the right. She leans back to launch the spear with her right hand. Her left arm is stretched out to the right with the two hind paws of a feline skin hanging from it. She wears a tall helmet with crest, chiton belted at the waist leaving her right side of her body bare, and boots.
The weapons were attached in metal, carved or may have been painted. Traces of paint remain.
Slab 1020 is part of a sequence that continues on slab 1021. 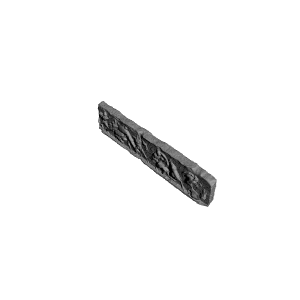