3D
Scan The World
2,163 views 84 downloads
1 collection
Community Prints Add your picture
Be the first to share a picture of this printed object
0 comments

The Minotaur is portrayed as it succumbs to the attack by Theseus (portrayed in the adjacent statue): this monstrous being with a human body and bull's head was neutralised by a manouvre which forced it to its knees, held from behind by the horns or hte arm as indicated by the inclined head and the suggestion of raised arms accompanying the torsion of the head and chest towards the enemy. Roman copy of a greek original of around the mid-5th century BC, hypothetically attributed to the sculptor Myron. Late 1st cent. AD. 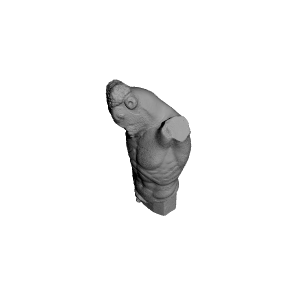