Mother Russia is a national personification of Russia, appearing in patriotic posters, statues etc. The usage of the term "mother" in reference to a nation or culture symbolizes the "spirit of collectivity". In the Soviet period, the term Rodina-Mat was preferred, as representing the multi-ethnic Soviet Union, and was used especially to commemorate the Eastern Front of World War II.
The Motherland Calls, also called Mother Motherland, Mother Motherland Is Calling, simply The Motherland, or The Mamayev Monument, is a statue in Mamayev Kurgan in Volgograd, Russia, commemorating the Battle of Stalingrad. It was designed by sculptor Yevgeny Vuchetich and structural engineer Nikolai Nikitin, and declared the largest statue in the world in 1967. Compared with the later higher statues, The Motherland Calls is significantly more complex from an engineering point of view, due to its characteristic posture with a sword raised high in the right hand and the left hand extended in a calling gesture. The technology behind the statue is based on a combination of prestressed concrete with wire ropes structure, a solution which can be found also in another work of Nikitin's, the super-tall Ostankino Tower in Moscow. It is the tallest statue of a woman in the world.
This object is part of "Scan The World". Scan the World is a non-profit initiative introduced by MyMiniFactory, through which we are creating a digital archive of fully 3D printable sculptures, artworks and landmarks from across the globe for the public to access for free. Scan the World is an open source, community effort, if you have interesting items around you and would like to contribute, email stw@myminifactory.com to find out how you can help.
Show more Show less
License
Printing Details 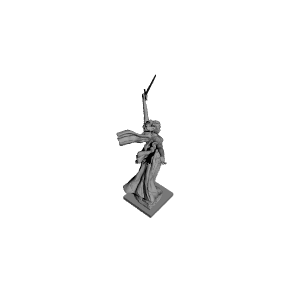 ×
46 collections where you can find The Motherland Calls in Volgograd, Russia by Scan The World
×
Paden Gentry
@PadenGentry
3
Printed on: Prusa i3 MK2 Kit
Material: PLA
Posted at: 25th February 2018