The Mummy of Tahathor at The Ipswich Museum, Ipswich

3D
Scan The World
5,646 views 521 downloads
2 collections
Community Prints Add your picture
Be the first to share a picture of this printed object
0 comments

The Mummy of Tahathor at The Ipswich Museum, Ipswich

From the hieroglyphs engravved on the case, the contents of this coffin is the mummy of Lady Tahathor, a woman of great wealth and power who lived and died in Luxour about 2,700 years ago in the 25th or 26th Egyptian Dynasty (600 years after the death of Tutankhamun). The coffin was brought to England in the 1850s and though there is not much known about her, recent X-Rays show that she died in her mid twenties of natural causes. She had a full set of teeth, but they had worked loose in transit and can be seen on the x-ray scattered across her chest.

The Victorians were fascinated by Ancient Egypt and many travelled to Egypt on sightseeting tours. One of them was George H. Errington of Colchester who in 1856 chartered a boat and sailed up the Nile. In a cemetery at Luxor, he bought this mummy for seven sovereigns (about £387) and donated it to the Colchester Museum in 1871. 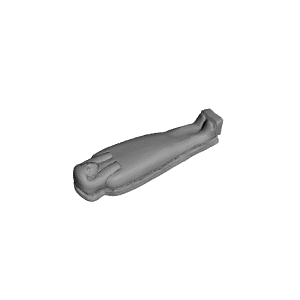 ×
2 collections where you can find The Mummy of Tahathor at The Ipswich Museum, Ipswich by Scan The World