3D
Scan The World
7,331 views 816 downloads
5 collections
Community Prints Add your picture
Be the first to share a picture of this printed object
0 comments

The National Memorial Arch is dedicated "to the officers and private soldiers of the Continental Army December 19, 1777 June 19, 1778". The Arch is situated at the top of a hill at the intersection of Gulph Road and Outer Line Drive in Valley Forge National Historical Park, Chester County, Pennsylvania.

The Arch was erected in 1910 by an act of the 61st Congress. Initially, in 1908, it was proposed to erect two memorial arches in the park, but the bill was amended to create a single arch to save money. It is modeled on the Arch of Titus in Rome. The architect in charge of the arch was Paul Philippe Cret, a professor at the University of Pennsylvania. The arch was criticized by the Philadelphia Record who observed that arches are typically urban structures and questioned its location in a rural setting.

The 60-foot high arch was dedicated on June 19, 1917 in a ceremony attended by a number of U.S. Congressmen. Paul Cret did not attend as he was then en route to France where he served as an interpreter for the U.S. Army. 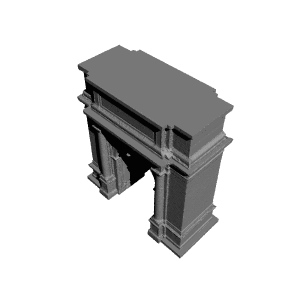 ×
5 collections where you can find The National Memorial Arch at Valley Forge, Pennsylvania by Scan The World