The Phlegmatic at The Palace of Versailles, France

3D
Scan The World
2,227 views 246 downloads
Add to collection
4 0
Community Prints Add your picture
Be the first to share a picture of this printed object
0 comments

The Phlegmatic at The Palace of Versailles, France

This marble sculpture titled 'Le Flegmatique' (eng. Phlegmatic, meaning sluggish or apathetic) was made between 1675-1679 by French sculptor Matthieu Lespagnandelle (1616-1689). The statue was made alongside three other sculptures personifying the allegory of the human conditions of man : The Choleric, The Blood and The Melancholic. This phlegmatic temperament, which is someone of cold or slow character, is represented by an older man with his arms folded, shrouded in a thick cloak. At his feet is a tortoise, symbollic of being a slow and quiet animal.

The original sculpture was removed from the park in 2007. Very eroded, it was sheltered in the lower gallery of Versailles after its restoration. A plaster mold now replaces it in the gardens. 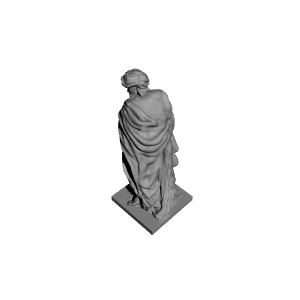 ×
0 collections where you can find The Phlegmatic at The Palace of Versailles, France by Scan The World