The Piranesi Vase at The British Museum, London

3D
Scan The World
6,652 views 725 downloads
2 collections
Community Prints Add your picture
Be the first to share a picture of this printed object
0 comments

The Piranesi Vase at The British Museum, London

The celebrated Italian architect and engraver Giovanni Battista Piranesi (1720-78) is best known for his architectural views of ancient and modern Rome aimed at the Grand Tour market. By the late 1760s he began to engage in the lucrative restoration and sale of antiquities. In business partnership with the British dealer Gavin Hamilton (1723-98), he acquired in 1769 a great number of ancient fragments found at the Pantanello, a site on the grounds of the villa of the Roman Emperor Hadrian at Tivoli near Rome. He restored these fragments and incorporated them into highly decorative pastiches, many of which he published in Vasi, Candelabri, Cippi, Sarcofagi… (2 vols, 1778). Most of the plates in this publication were dedicated to past or prospective clients, over fifty of whom were British, indicating their pre-eminence on the antiquities market.

Piranesi's description of this vase in his book (vol. II plates 58-59) praises it as a fine work of the time of the Roman emperor Hadrian (reigned AD 117-138). However, it does not mention that only small sections of it are ancient (two of the bull's heads on the base, sections of the lion's legs and parts of the relief depicting satyrs picking grapes), while the rest are entirely of his own making. In effect, the vase is a grand neo-classical work rather than an antiquity.

The Piranesi Vase was acquired in Rome by the Scottish merchant John Boyd. A large West Indian proprietor, Boyd had been made a baronet in 1775 and immediately after embarked on his Grand Tour of Italy from 1775 to 1776. He owned Danson House, Bexley, a handsome Georgian villa built in 1762-67 by the architect Sir Robert Taylor, where he displayed his large collection of paintings, books and a number of antiquities 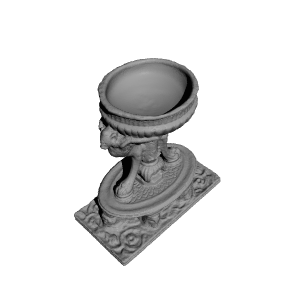 ×
2 collections where you can find The Piranesi Vase at The British Museum, London by Scan The World