3D
Featured Scan The World
5,282 views 1,198 downloads
5 collections
Community Prints Add your picture
Be the first to share a picture of this printed object
2 comments

In this tondo Michelangelo placed, next to the stern Madonna, a Child whose pose recalls that of an ancient funeral genii. Thus the overall effect, despite the apparently playful attitude of the Child, is deeply serious, and the Madonna has an almost prophetic force, because of her size, which bursts out from the frame of the relief.

This cast is from the original high-relief housed at the Museo Nazionale del Bargello in Florence.

In the Tondo Pitti group (commissioned by Bartolomeo Pitti), any formal frame is ignored and this outline is slightly oval. The Madonna and Child are simpler and more clearly formed than in the Tondo Taddei. With her left hand she embraces the infant Jesus, who leans his whole weight against her, bracing his head with a bent arm resting on the open book (which symbolizes wisdom) lying on her lap.

The Madonna is seated on a low block of stone, filling the entire composition. But owing to the slightly oval format, and to her head breaking the tondo’s edge, she does not appear to be crowded. Her features are more sharply defined here than those of Michelangelo’s earlier Madonnas. Full locks of hair frame her angular face, with its deep dimples and more prominent chin. She wears an unusual ornamental head covering — the first in a series later employed by the master — which heightens the expression of watchfulness in her face.

As in the Tondo Pitti, the approaching figure of Saint John also plays a subordinate role and is unfinished. He appears to have caught the Madonna’s attention as she looks back over her shoulder. 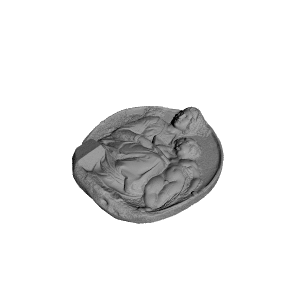