The Prince Imperial and his Dog Nero

The Prince Imperial and his Dog Nero

This statue shows the only son of the Emperor Napoleon III, around eight years old with the Emperor's dog Nero.

Jean-Baptiste Carpeaux knew the young prince well, as he taught the prince how to draw. He originally asked another boy to pose so that he could focus on the clothing. The prince wears ordinary clothing, not imperial garments.

This was a well-received portrait, reproduced in lots of different materials and sizes, in bronze, plaster, terracotta and biscuit. Even after the fall of the Empire and the tragic death of the Prince in South Africa, this portrait continued to be sold under the title "Boy With Dog." 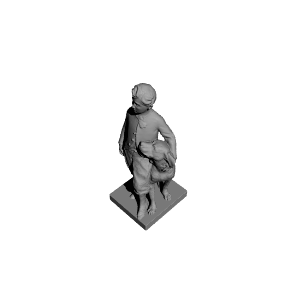