The Prodigal Son at The Collection, Lincoln

3D
Scan The World
5,624 views 297 downloads
3 collections
Community Prints Add your picture
Be the first to share a picture of this printed object
0 comments

The Prodigal Son at The Collection, Lincoln

It will readily be admitted that the two figures compose into a very beautiful group, telling the tale of paternal affection and forgiveness, and of repentance, with much pathos: the attitudes of both are most striking, and blend well with each other; while the subject is treated with a purity of feeling that befits the sacred narration. At the same time, the well-formed and rounded limbs of the young man, seem scarcely to belong to one who had long fed on "the husks that the swine did eat," and was even then "perishing with hunger." He exhibits no appearance of destitutution, but, on the contrary, has all the vigour and strength of incipient manhood that knows not want. The wasted and attenuated body, would, doubtless, have exhibited the "prodigal" with more truth, but in a less attractive form. Still it must be regarded as a production that should confer no inconsiderable distinction on the sculptor, for the feeling which prompted the work and the skill that has executed it. A reduced copy of this group has been produced in parian by Messrs. Copcland for their beautiful series of statuettes. 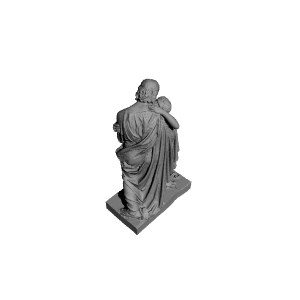 ×
3 collections where you can find The Prodigal Son at The Collection, Lincoln by Threedscans