3D
Scan The World
3,193 views 143 downloads
1 collection
Community Prints Add your picture
Be the first to share a picture of this printed object
0 comments

Giovanni Pisano designed a revolutionary façade for Siena Cathedral. It housed a series of monumental figures in arcades. This marble head formed the upper part of one of those full-length statues. The sculptor allowed for the fact that the figure was to be placed high up on the church by carving it with great boldness. They form a landmark in the history of sculpture and are conceived with such heroic breadth and carved with such freedom that in discussing them reference has repeatedly been made to the work of Michelangelo.

The importance of the Siena statues in the history of sculpture is difficult to overstate. The facade is the single example in Italy of Gothic monumental sculpture integrated in a comprehensive architectural scheme, and though their source of inspiration stemmed from France, the statues with which it was decorated between 1284 and 1295 are some of the most personal and most moving of all sculptures. The statues for which Giovanni Pisano was in whole or in part responsible were confined to the first register of the facade, and represent prophets and prophetesses with inscriptions relating to the Virgin to whom the Cathedral is dedicated.
The present piece can be confidently associated with the full-length figure of the prophet Haggai because of the scroll held in his hand.

This is the only work firmly attributed to Giovanni Pisano outside Italy. 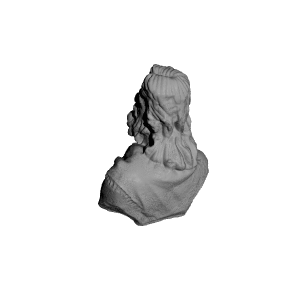 ×
1 collections where you can find The Prophet Haggai by vam