3D
Featured Scan The World
2,680 views 182 downloads
2 collections
Community Prints Add your picture
Be the first to share a picture of this printed object
0 comments

This head originates from a full-figure sculpture called the Ramin Rider, or Rampin Horseman, from ca. 550 BC. The overall work is an equestrian statue from the Archaic Period of Ancient Greece, masterfully created from marble, with traces of red and black paint on its original.

The head of the rider, featured here, was found on the Acropolis of Athens in 1877 and donated to the Louvre. It was not associated with the rest of the statue, found ten years later, until 1936. The head was copied so that the plaster cast could sit on the original body, whilst the original head is displayed with a cast of the body in the Paris museum.

The rider has many features typical of an Archaic kouros, but has several symmetrical features that break with the period's conventions.

The overall statue was originally thought to be a part of a set of statues, perhaps paired with another as a mounted presentation of Castor and Pollux common on vases from this period. According to another theory, the statue represents the winner of a race. This theory is supported by the crown of lovage, given to winners of the Nemean Games and the Isthmian Games, on the statue. 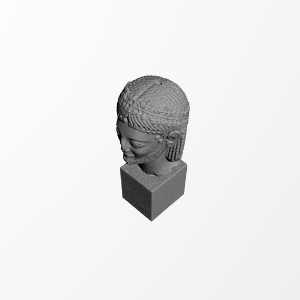