3D
360°
Featured Scan The World
1,657 views 107 downloads
2 collections
Community Prints Add your picture
Be the first to share a picture of this printed object
0 comments

This fragmentary head comes from a statue of a naked young man. It bears the nickname 'Rayet' head after its previous owner, a French archaeologist. The original marble is housed in Ny Carlsberg Glyptotek, Copenhagen (418)

The Rayet head is regarded as one of the finest of all Archaic sculptures, and it created a great buzz of excitement when dug up in the 1870s. Scholars have speculated for decades about other works possibly by the same sculptor, a link with the sporting reliefs found in the Themistoklean wall, whether the head belongs to some legs discovered in 1953 - and so on.

The head was originally part of a roughly lifesize standing kouros. His ears are unusually fleshy, leading to a claim that he may represent a boxer or wrestler. The original of this cast clearly shows remnants of the red paint that decorated the young man's eyes and hair, which is now being cut short in this soft of sculpture. 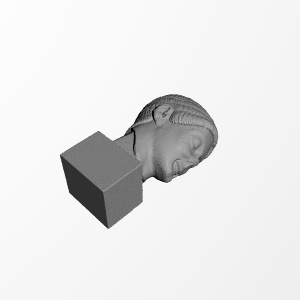