3D
360°
Featured Scan The World
4,606 views 469 downloads
3 collections
Community Prints Add your picture
Be the first to share a picture of this printed object
0 comments

he daring instability and torsion of The River are rare in Maillol's sculpture. Instead of trying to emulate the dynamism of twentieth-century life, as did so many artists of his time, Maillol usually sought an art of serenity and stillness, of classical nobility and simplicity. As late as 1937, in fact, he remarked, "For my taste, there should be as little movement as possible in sculpture." Yet within a year or so afterward he had conceived The River, a work in which the movement is almost reckless.

Commissioned to create a monument to a notable pacifist, the French writer Henri Barbusse, Maillol conceived the sculpture as a work on the theme of war: a woman stabbed in the back, and falling. When the commission fell through, he transformed the idea into The River. In a departure from the usual conventions of monumental sculpture, the figure lies low to the ground and rests apparently precariously on the pedestal, even hanging below its edge. Twisting and turning, her raised arms suggesting the pressure of some powerful current, this woman is the personification of moving water. 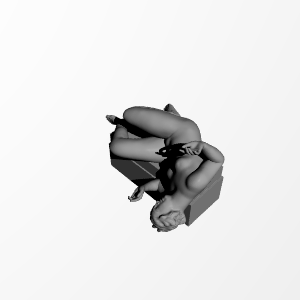 ×
3 collections where you can find The River by CEG