3D
360°
Featured Scan The World
6,072 views 1,057 downloads
10 collections
Community Prints Add your picture
Be the first to share a picture of this printed object
0 comments

The so called "Alexander Rondanini", depicts the Madedonian King and conqueror standing in the nude with his cuirasse and armour resting behind him. He kneels on a rock with a jug in his left hand.

The original belongs to a group created by Euphranor depicting King Philip of Macedon on his chariot lead by four horses; his son Alexander, taking on the chariot, holds the reins in both hands (these were removed and replaced by the armour in future copies). The work was made after the Battle of Chaeronea in 338 BC. 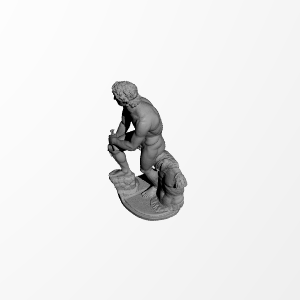