The Runners in Sint-Niklaas, Belgium

3D
Scan The World
2,133 views 212 downloads
1 collection
Community Prints Add your picture
Be the first to share a picture of this printed object
0 comments

The Runners in Sint-Niklaas, Belgium

The group originally stood on the former station square. It is a dynamic piece of art that from the outset the taste was for young and old.

Three young bodies moving, elegant and smooth, taut and concentrated on the effort. What purpose they have in mind? What future awaits them? It remain open questions. However, the viewer is charmed by the life that radiate racing young people.

The fairly realistic depiction is a response to the negativity of the sixties of last century. The place also sets against the conceptual and anti-aesthetic currents in the art of those years. Nevertheless, this design can not be classified among the classical sculpture. The artist creates according to its own discretion a style that can be called either new, contemporary and timeless.

The sculptor used herein, the technique of the lost wax. She first builds the image in clay. Then they cast the mold, first negative and then positive so that it acquires a model in plaster. This model is further refined. Then it's the foundry which again makes a negative. He was invested with and provides the entire cast and ventilation channels. Then is fired the wax. Then, the image is ready to be cast in bronze. 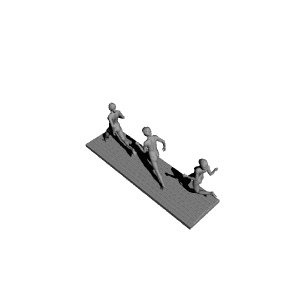 ×
1 collections where you can find The Runners in Sint-Niklaas, Belgium by Scan The World