3D
Scan The World
3,280 views 294 downloads
Community Prints Add your picture
Be the first to share a picture of this printed object
0 comments

The sculpture is a work of Adolfo Apolloni (Rome, 1855-1923) purchased by the National Academy of San Luca with Müller Prize 1911 [1] . The subject is represented as a nude female figure, appearance and classic proportions, in a precarious balance on a block of marble partially blank and in the act of sculpting a statue, of which emerge the arms, back and the head, whose newly defined features can be seen behind the figure. The current location against the wall makes it difficult to rear and side vision, and then the immediate understanding of the subject depicted, which provides the pretext for a demonstration "teaching" the different levels of image definition carved and used for the processing of marble tools : the chisel and mallet held in his hands the personification of sculpture.

The art of Apolloni, which manifests here at its best, is a typical example of that eclecticism that by making extensive use of the classical models filtered through the vision of Michelangelo and Bernini, aims to provide a representative image of the Italian genius to-date trends and symbolist art nouveau of the moment, with similar results to those obtained in architecture from the Sacconi, as has been noted by Emilio Lavagnino (1956). No coincidence that he participated in the company of Victorian decorative, performing a bronze winged victory.
After graduating in engineering Apolloni trained as a sculptor at the Accademia di San Luca, later (1879) moved to the United States of America, in Boston and then in Providence. He returned to Rome in 1883 had prominent positions both artistic, and political. Member since 1903 of the Accademia di San Luca, of which he was president in 1914-15 and in 1919-20, played an important role in public life as a sculptor. In the last part of his life he devoted himself to politics as councilor for Antiquities and Fine Arts at the City of Rome in 1904, deputy mayor in 1914 and mayor from 1919 to 1920, was finally senator from 1919 to 1921.
He founded in Fano the School of industrial art, now State Institute of art, which bears his name, and that preserves many of his works in bronze and plaster, including a copy of the sculpture .
He took part inter alia of the Committee for the restoration of the equestrian group Marco Aurelio, concluded in 1912, which gave a very careful and detailed report with important technical notations. 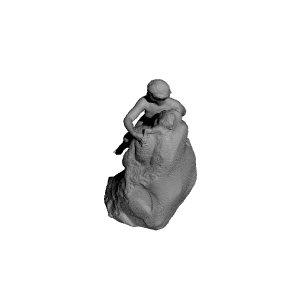