3D
360°
Scan The World
1,885 views 84 downloads
1 collection
Community Prints Add your picture
Be the first to share a picture of this printed object
0 comments

These three figures once decorated Ashurbapinal's throne room. They wear high, flat, horned crowns that are feathered at the top. Each figure is shown with its raised right hand holding an axe. The original figures carried bows in their left hands, but these were rubbed down and replaced with daggers. The king's experts had spotted a mistake and asked the sculptors to correct it. The figures are three of the seven Sebetti gods, important protective spirits in Assyria.

Assyrian wall panels were originally brightly painted. Small areas of black and red pigment still survive on some panels (not in this scan), and scientists are discovering microscopic traces of other colours using new scientific techniques. Colour is also visible on other objects, such as painted tiles and bricks.

From the North Palace, Nineveh, Iraq, 645-640 BC. Scanned part of the I Am Ashurbapinal exhibition at The British Museum, 2019. 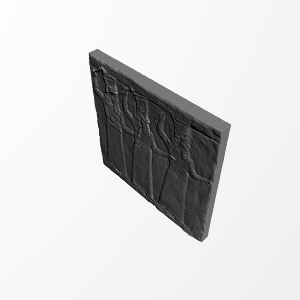