The Shade is a bronze sculpture created by Auguste Rodin in 1880. The piece takes influence from his earlier work, 'Adam' (on Scan The World), and subsequently featured in his larger piece 'The Three Shades' (also uploaded on Scan The World). This piece is riddled with symbolism which Rodin take great pride in doing so. Influenced heavily by the works of Michelangelo, notably his 'Slaves', there are a couple which can be noted in this piece. The main symbolism is held within the hands. Both gestured to the ground the sculpure emphasizes the earthly bonds to strike up Rodin's motif of the tormented being, creating an archway to the face of for the viewers eye to follow, the hands take inspiration from two famous pieces; The Shade's large right hand is held in a point which derives from Michelangelo's 'Creation of Adam' symbollic of the birth of human life, God giving life to Adam.

The left hand is more flaccid, borrowed from the dead Christ of the Pieta in the Cathedral of Florence. 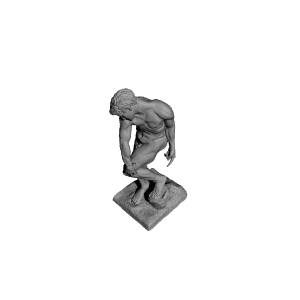