This life-size study was originally designed as a pair to compliment the sculptor's 'An Athlete Wrestling a Python'. Frederic Leighton initially titled the sculpture 'An Athlete awakening from Sleep', but may have felt that the new title better emphasised the languid mood of the piece.

Giuseppe Valona, the Italian model who posed for An Athlete Struggling with a Python, was again used for The Sluggard. Edgcumbe Staley described the moment when: ‘Giuseppe Valona, the model, a man of fine proportions, weary one day of posing in the studio, threw himself back, stretched out his arms and gave a great yawn. Leighton saw the whole performance and fixed it roughly in clay straight off.’ This anecdote suggests the artist was inspired by the spontaneous movement of the model, but in fact same contrapposto pose was present in Leighton’s work as early as 1869. A preliminary sketch of the pose can be found here. 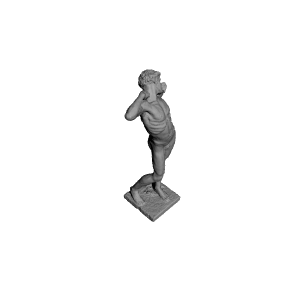 6-inch print made by Sculpteo. Painted by David Claudon.