3D
Scan The World
1,882 views 130 downloads
1 collection
Community Prints Add your picture
Be the first to share a picture of this printed object
0 comments

Constantin Meunier was a French sculptor from the late 19th - early 20th century. He took part to the Realist movement of his time through his scultpures depicting agricultural work in almost life size. Before, such big statues were supposed to be dedicated to "noble" themes as determined by the Academy of Fine-Arts: those themes were usually taken from the Greek and Roman mythology or from the Bible. Here, Meunier chose to represent the working class as it is – a choice that many artists of his time had made, such as Courbet or Monet. Thus he puts the "real" people at the centre of art. 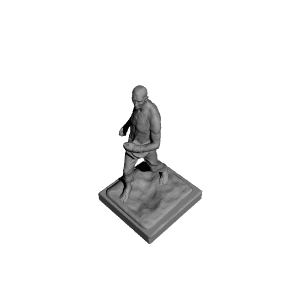