3D
360°
Scan The World
1,510 views 58 downloads
Community Prints Add your picture
Be the first to share a picture of this printed object
0 comments

The monument of the volumni was for the first time studied by the Paduan archaeologist Luigi Busato, who proposed before 1888 a first reconstruction starting from "almost two hundred pieces between big and small" in which it was found. He also considered part of the monument a small sphinx, with a feral body and a woman's head, found near the artefact along with the other fragments. In his reconstructive hypothesis, Busato placed it on the top of the slopes, adapting it forcibly into a small niche.
A careful stylistic examination has, subsequently, excluded not only the acroterial position, but the same relevance to the monument: unlike the other parts of the decorative apparatus, the sphinx presents in fact a treatment of rough surfaces, the features of the face and of the hairstyle are summaries, as well as the modeling of the torso and wings. Most likely it belonged to another funerary monument, of which it could constitute the acroterial element.

The Restoration of the monument

The restoration of the monument of the volumnii, carried out in Florence in the laboratories of the archaeological superintendence for Tuscany between 1983 and 1986, has allowed the recovery of an important testimony of the plurality of models and monumental typolodies and of the originality of the solutions adopted typical of the artistic language of the roman venetia, meeting point of different traditions, variously received and reworked.
Originally the monument was made with shaped blocks and secured to each other by metal pins and cement mortar, housed in holes and channels specially made on the lateral, upper and lower cutting surfaces of the blocks themselves. it was found in a fragmentary and incomplete state; it was then reassembled at the end of the nineteenth century and restored for the first time in 1927, according to the criteria then in force which involved the reconstruction, sometimes even arbitrary, of the missing parts. The reconstructions were not at the time in any way differentiated from the original. The restoration of the years 1983-1986 involved the complete disassembly of the monumental structure, whose single parts were subjected to a delicate cleaning operation. The subsequent reassembly required various interventions of integration and reconstruction, which were made in order to make them perfectly perceptible to the eye.
During the intervention a study carried out on the pediment has allowed to establish the non relevance to the monument of the small sphinx, placed in the nineteenth-century reconstruction of the Busato in acroterial position.
After restoration, the problem of the correct placement of the limestone slab was left unresolved, initially placed on the surface of the niche "not finding another suitable place": the slab would have been placed in that point perhaps to cover the hollow base that, inside, it could have contained the ossuaries of the volumnii. 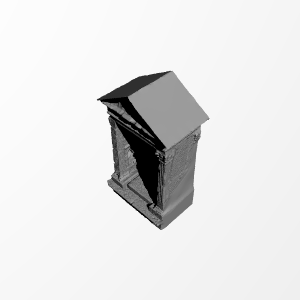