3D
Scan The World
4,127 views 379 downloads
3 collections
Community Prints Add your picture
Be the first to share a picture of this printed object
0 comments

In 1863 Charles Garnier, the architect of the new Paris Opera, commissioned four sculpted groups by four artists who had won the Grand Prix de Rome to decorate the facade of the building. Carpeaux was to cover the theme of Dance. Over a three-year period, he produced a variety of sketches and models before conveiving this turning farandole of women encirlcling the spirit of dance. The sculptor's main convern was to convey the feeling of movement, and this he achieved through a dual momentum of circular and vertical motion. The leaping spirit dominates the group, urging on the curcle of bacchantes, in unbalanced postures. The public was shocked by the realism of the female nudes, which they judges unseemly; indeed, a bottle of ink was thrown against the sculpture and its removal was requested. However, the war of 1870, followed by the death of Carpeaux, put an end to the controversy.

Due to its popular and characteristic style in figurative sculpture, many of the faces and subjects in this piece were separated, cast and sold separately. The bacchante on the left of the group piece, which the bottle of ink was thrown at, was turned into a bust and can be seen here on Scan the World. 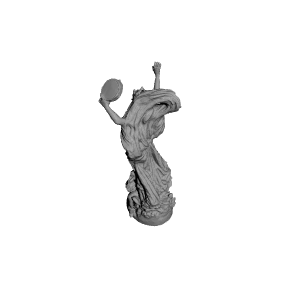 ×
3 collections where you can find The Spirit of the Dance at The Musée d'Orsay, Paris by Scan The World