The Stone of Coyolxauhqui

The Stone of Coyolxauhqui

In Aztec mythology, Coyolxauhqui was a daughter of Coatlicue and Mixcoatl and is the leader of the Centzon Huitznahuas, the southern star gods. Coyolxauhqui ruled over her brothers, the Four Hundred Southerners, she led them in attack against their mother, Coatlicue, when they learned she was pregnant, convinced she dishonored them all.
A large shield-shaped stone relief reflecting this story was found at the base of the stairs of the Templo Mayor. On this disk, Coyolxauhqui is shown spread out on her side, with her head, arms and legs chopped away from her body. Her position in the stone carving may represent the full moon. But other scholars believe that she should be understood as the Goddess of the Milky Way, or be associated with patterns of other stars associated with Huitzilopochtli. She is distinguished by bells of eagle down in her hair, a bell symbol on her cheek, and an ear tab showing the Mexica year sign. As with images of her mother, she is shown with a skull tied to her belt. Scholars also believe that the decapitation and destruction of Coyolxauhqui is reflected in the pattern of warrior ritual sacrifice. First, captives’ hearts were cut out. Then the bodies were cast from the temple. At the bottom of the stairs, near the Coyolxauhqui stone, the bodies were decapitated and dismembered. 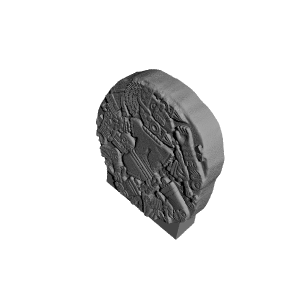 ×
7 collections where you can find The Stone of Coyolxauhqui by Scan The World
×
Louise Krasniewicz
@LouiseK
1
Printed on: MakerBot Replicator 2
Material: PLA
Posted at: 16th June 2019