This marble statue by Ignace Broche, started in 1741 in Belfort and finished in 1749 in Paris was taken from an 18th century tomb.

A "Pleureuse" is a statue or painting of a weeping woman typically created to adorn a tomb or grave.

This "pleureuse" (or weeping woman) is a fragment taken from the tomb of Joseph Durey de Sauroy (1711-1770) marqui of Terrail, Marshall of the Kings Army's and Camps. After the first French revolution, the tomb was re-located in 1778 to the Church of Théatins in Paris. It is now in the permanent collection at The Louvre, Paris. 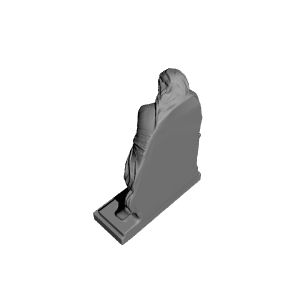 ×
2 collections where you can find The Suffering 'Pleureuse' at The Louvre, Paris by Scan The World
×
Andrew Wu
@andrewwu
1
Printed on: Other
Material: PLA
Posted at: 08th October 2017