3D
Scan The World
5,284 views 224 downloads
Community Prints Add your picture
Be the first to share a picture of this printed object
0 comments

This bronze statue of the Buddha was of the first objects to enter the collections, and remains among the most significant works in Birmingham Museums & Art Gallery.The Sultanganj Buddha is the largest known complete Indian bronze sculpture. Cast by the lost-wax technique on a clay core, this statue was excavated by E B Harris, a railway engineer, at Sultanganj in northern India during the course of railway construction in 1862.

The Sultanganj Buddha is a Gupta-Pala transitional period sculpture, the largest substantially complete copper Buddha figure known from this time. The statue is dated by archaeologists to between 500 to 700 AD. It is 2.3m high and 1m wide, weighs over 500 kg. It was found in the North Indian town of Sultanganj, Bhagalpur district, Bihar in 1861 during the construction of the East Indian Railway.

The Sultanganj Buddha was cast in pure, but unrefined copper by the cire perdue or lost wax technique. The Buddha statue stands with his right hand raised in abhayamudra (a gesture of reassurance or protection), while his left hand is held downwards with palm outwards, said to indicate granting a favour. The end of the monastic robe is held between the thumb and forefinger of this hand in the manner still practised by Theravadin monks to this day. 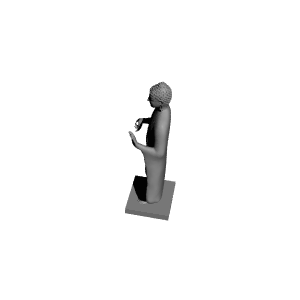 ×
0 collections where you can find The Sultanganj Buddha by 3DLirious