3D
Scan The World
6,824 views 1,499 downloads
17 collections
Community Prints Add your picture
Be the first to share a picture of this printed object
1 comments

This extraordinary marble is testament to the vision and talent of one of the foremost British 19th-century sculptors, whose best known work is the figure of Nelson on top of the famous column in Trafalgar Square. Edward Hodges Baily was considered the greatest exponent of 'ideal' sculpture in mid-nineteenth century England. His monumental Three Graces, is his most ambitious 'ideal' work. Baily radically reimagined the Three Graces by positioning his goddessses seated and reclining, in a composition which his tutor Johm Flaxman predicted would 'establish at once his reputation'. Joseph Neeld's exceptional collection of sculpture remained complete and in situ until the majority of the sculptures were sold at auction in 1966. The Three Graces has remained in private ownership since that time. 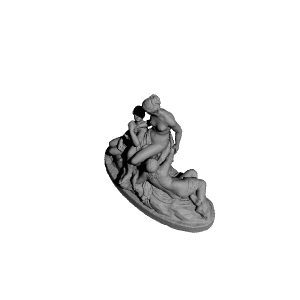